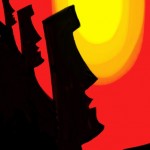 Have you ever seen an image that was a part of the background and not part of the main scene that just burnt itself into your brain? It eventually becomes a voice that won’t go away. Something about that image drives you, compels you to recreate it, reinterpret it, reinvent it until it quiets itself down and let’s you sleep. The image is only a part of the background. It has nothing to do with the main story. It is only a passing point in a longer narrative.

Well, that’s where Sons of the Moai comes from. I still haven’t figured out where it came from, but I saw this picture and needed to recreate it. It’s out there somewhere in the ether, and I’ll probably see it again soon. However, for now I can let it rest.

Speaking of rest, I’m taking a slight hiatus from anything too strenuous with TKD. So much has been going on lately, that I would up not only burning candles at both ends, but I added a few extra wicks and decided to burn those too. It started to cause a mini breakdown, and made me realize that on occasion I need to take a step away and work on things more recreational – hence Sons of the Moai. If all goes well, I will be able to use the time to work on more blog posts, write up some tutorials, and work on some much needed art ideas. I have notes for about 25 pieces that have been started, and yet to be finished.

The hiatus will also give me time to work on the new site and bring it up to IE speed (or is that down to IE speed). The site itself is far from done, but it is at a point that I can add and take away pieces a lot easier than I could before. It also gives me a chance to put myself more out there. I also need to rethink the CafePress shop, but that is a leisurely hobby and something I can take care of at my leisure.